Future of Total War: Immortal Empire with Warhammer 3 and CA

when Total War: Warhammer 3 When game director Ian Roxburgh first joined Creative Assembly as a marketing manager two decades ago, he had a problem to solve: how to explain to audiences what Total War was all about. “You play this giant sandbox, and while you’re playing it, it’s all very normal. But if you keep proper records on it, some of the most incredible storylines develop. This is something we hope to do more of in the future. Storytelling is something we’re going to continue to evolve—at scale. But – and I’m saying this to the fans – don’t worry! A total war game will always have sandbox gameplay. It is absolutely sacred.”

It’s hard to argue with that. A few months ago, Creative Assembly released the first iteration of Immortal Empires, the most content-rich strategy sandbox in gaming. The combination of three ‘tentpole’ releases – as the team calls them – has been a long time in the making, with numerous pieces of DLC and free updates. Sustained inspiration for such a sprawling project might be hard to come by in any other setting, but when Roxburgh and team first sat down to put their newly acquired Warhammer license to good use, they had the opposite problem: How do you fit such a sprawling world into a traditional Total War format?

“We sat down, we started looking at a lot of content and lore. We wanted to do everything. After all, people want to play this world with everything in it. But there is no way you can do that [one] Game and judge it, either from a Total War or Warhammer lore perspective. We have to play at least two or three games and that won’t be enough!” Ultimately, Immortal Empires was decided upon as the long-term goal of the trilogy, to reward dedicated fans for free for having fully realized the trilogy – Warhammer World.

“They were baby steps,” says DLC director Rich Eldridge. “When we started this project, most of us were just diehard Warhammer nuts. Although we haven’t played in a while. It was amazing to see everyone pulling out troops from their old shoe boxes and stuff. As we went along, we got more ambitious with the trilogy. It was almost like testing the waters with the mortal realms. ” And that ultimate goal offers endless opportunities for iteration, but with it comes its own challenge: What to prioritize now and save for later, as the final map begins to take shape?

“We never thought we were bare bones in the beginning. It felt great at the time. It just got even More By and large as time goes on,” says Roxburgh. “We would have liked to have had minor settlement battles for the first game. But the cost of the art was astronomical, where we would have had to redo the art and the pipeline. At the end of the day, we have a timeline and a budget, and we can’t do everything.

Aldridge says, “’My toughest meeting was when we were discussing the Warhammer 1 rosters, and we were discussing Vampire Counts, and there was just so much choice. We knew we couldn’t do it all. But I took inspiration from it to move forward. I find it rewarding that we know there is more to come. We can start talking to our fanbase. We can start drip-feeding the little things in there: names, background descriptions, loading screen quotes. We want to flesh out as much of the Warhammer world as possible.” 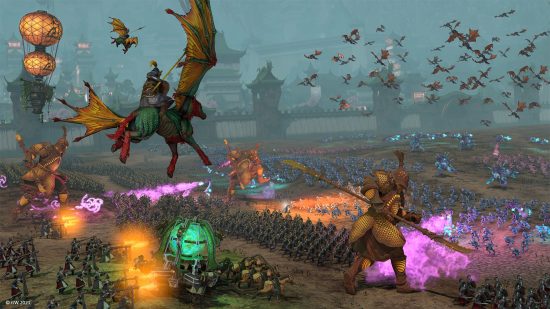 “We approach it as history,” says Roxburgh. “We don’t go: ‘We want to do a lot of design things in a Total War game, but the lore doesn’t support it.’ We start from the other way. Let’s first understand the legend and this world. We played tabletop. Read books. Immersed ourselves in the world. Then: let’s design a game with this spirit.

“There are many times when we feel that the work that we need to do is not supported by the science,” he continues. “And that includes having a really good relationship with Games Workshop. There are times when we’re like, okay, I know ideally you wouldn’t do this from your perspective, but we really need the game to work this way. And they will be happy to move because they trust us.”

“We love the gray areas in science,” says Aldridge. “Not everything I mean is necessarily portrayed by GW. We read army books and supplements cover to cover and ask questions. And they certainly become the inspiration for early DLC, Belegor being a prime example. There was a bit of information in his story about how he would go to his ancestors to draw their power, which inspired his ancestors to represent the ghost dwarves.” 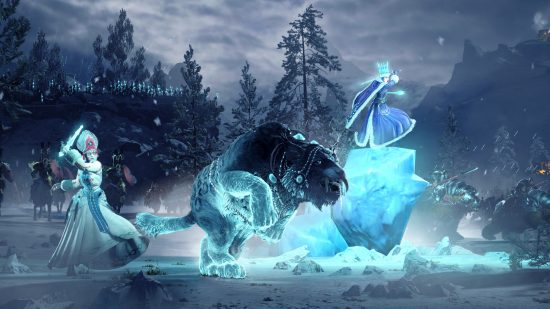 To compare Warhammer 3’s player growth since the release of Immortal Empires to the revival of Belegar’s ghostly ancestors, perhaps overdramatic (and probably worth grudges), it’s hard to ignore the wave of community positivity – and Steam review scores – that has come in the wake of the megamap. Content is welcome, of course, but IE ushered in another change from Creative Assembly – greater information and transparency after months of relative silence.

“Developers love to tell you all about it because they’re so excited about what they’re doing. But obviously, we want to say the right things at the right time,” says Aldridge. “With post-content support, it felt like a good opportunity to reiterate our wishes. Making games is hard. This is not an easy task. There are obstacles and challenges, but we try to overcome them and we try to draw inspiration from our communities. That’s why we’re always open to talk: we want to hear about the good, so we can make better. We want to hear about bad things, so we can fix them or move away from them. The feeling in the team was that we wanted to be more transparent and open going forward. We want people to understand what we are trying to do.”

Going forward, it seems that transparency is something that the team is committed to maintaining following new releases and changes. And it sounds like part of those changes could include a whole new kind of expansion for the trilogy, first tested with Endgame Crisis of Immortal Empires. 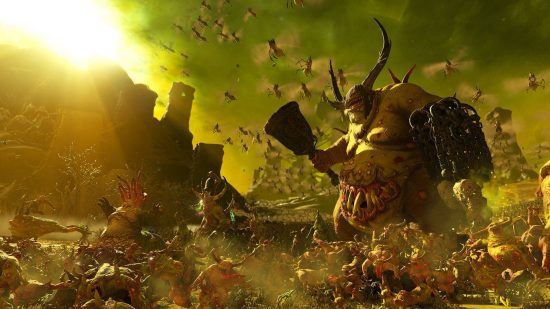 “Our vision, our mantra for it, was to have a set of options and let you as the player choose who you want to interact with or turn them all off,” Aldridge says. “We’ve obviously put all the terrain into the game in WH3. We probably won’t scale the map in those directions. In that, we’re going to completely shape things, tinker with them, add depth, add challenge, and endgames were just the first attempt to try to do that and give people a different experience.”

“Going forward we can’t do things where you have a pack of endgame challenges or something you can buy as DLC to refresh that experience in Immortal Empires,” says Roxburgh. “Instead of just creating new models there’s room to think about some more off-the-cuff DLC, to put some more gameplay in there.”

New models, however, are all but guaranteed. A fan-favorite idea at the moment is an expansion based on the much-loved Tamurkhan: The Throne of Chaos campaign for the tabletop game, and the gangrenous toad dragon it contains. But Games Workshop’s supplements are also known for advancing the setting’s narrative, and with the sandbox of Immortal Empires being CA’s main focus, is there still room for these kinds of big plot milestones? 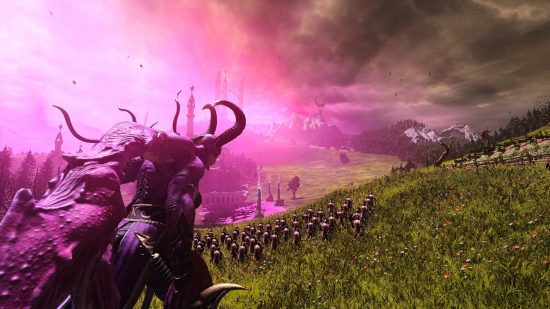 “That’s what Ian did on Warhammer 2,” says Aldridge. “In Warhammer 1 we didn’t have that much to bring to it. We try to find that right balance where we try to bring science to the forefront for people to enjoy – I knew that when we Warden and Judge. It’s a great story of Eltharian and Grom’s lore that we wanted to tell. Players also have the opportunity to create their own stories, but (a structured story) definitely has a place. We know a lot of people really enjoy it, so I think you’ll see a lot more.”

“We’ve learned a lot about story and sandbox from Warhammer 2 and 3 that we’ll take into the next phase,” says Roxburgh, “and possibly experiment with DLCs over time. This is something we are committed to getting right. Developing and improving with all kinds of games, not just Warhammer. We know a lot of people enjoy their sandbox side.”