When this game first debuted a few years ago, I dismissed it out of hand. I was tired of the IP, and Eric Lang certainly had a pedigree in board game design, which didn’t necessarily translate to wargaming, so I slapped CMON on their biggest design name with their biggest IP and decided to pass. On the title. It certainly didn’t help that I was burned out in large scale war games and downsized in squad level games, but that was it. And boy, was it a mistake, because this might be my favorite miniatures game, if not the most unique.

The selling point here is the strategy board, another thing I found suspicious was tacked-on to integrate characters like Cersei and Sansa that wouldn’t make sense to integrate on the battlefield. Mechanically, it functions as a secondary worker placement game—ASOIAF uses optional activations, and most of these will be used on combat units, while players with non-combat units (NCU) can choose to activate them to claim an empty space. Zone on the strategy board and use the effect of that zone. Players also have access to their strategy deck, which will include their faction’s base cards, including their commander. These cards have powerful effects and triggers that indicate when they are played, from when a unit tries to attack to when you claim or control a specific area of ​​the strategy board. Many factions have zones they prefer over others – the Lannisters, for example, like to control the crown to play their best cards. This introduces interesting gameplay choices where a player does not personally care for a particular part of the strategy board, but is still encouraged to fight for control of it to deny it to his opponent. In most worker placement games, taking an action that doesn’t require you to just mess with another player is usually suboptimal, but there are NCU abilities and trick cards that can change the effect of the zone to a more desirable option, namely throwing a wrench into you. Opponents’ plans are always a valid option.

At first, I was worried that adding worker placement and hand management to a miniatures game would make it confusing, but each part has been whittled down to the right level of complexity to provide an interesting decision space without being overwhelming. This is especially noticeable in combat, where most minigames require their best players to memorize the vague rules of a doctoral thesis—but here, combat units take one of five actions when activated. Keywords exist in that sweet spot where they only exist to shorthand a handful of recurring capabilities that the community would informally keyword. Similarly, the game has only three conditions, each of the three times the player tied to one of the players will roll a number of dice. List building is an equally simple and enjoyable experience of finding synergies between various units and strategy cards, streamlined by an excellent companion app. It all ties together in a game that looks like it belongs in a sci-fi universe on the outside, but is actually easy to teach and learn. 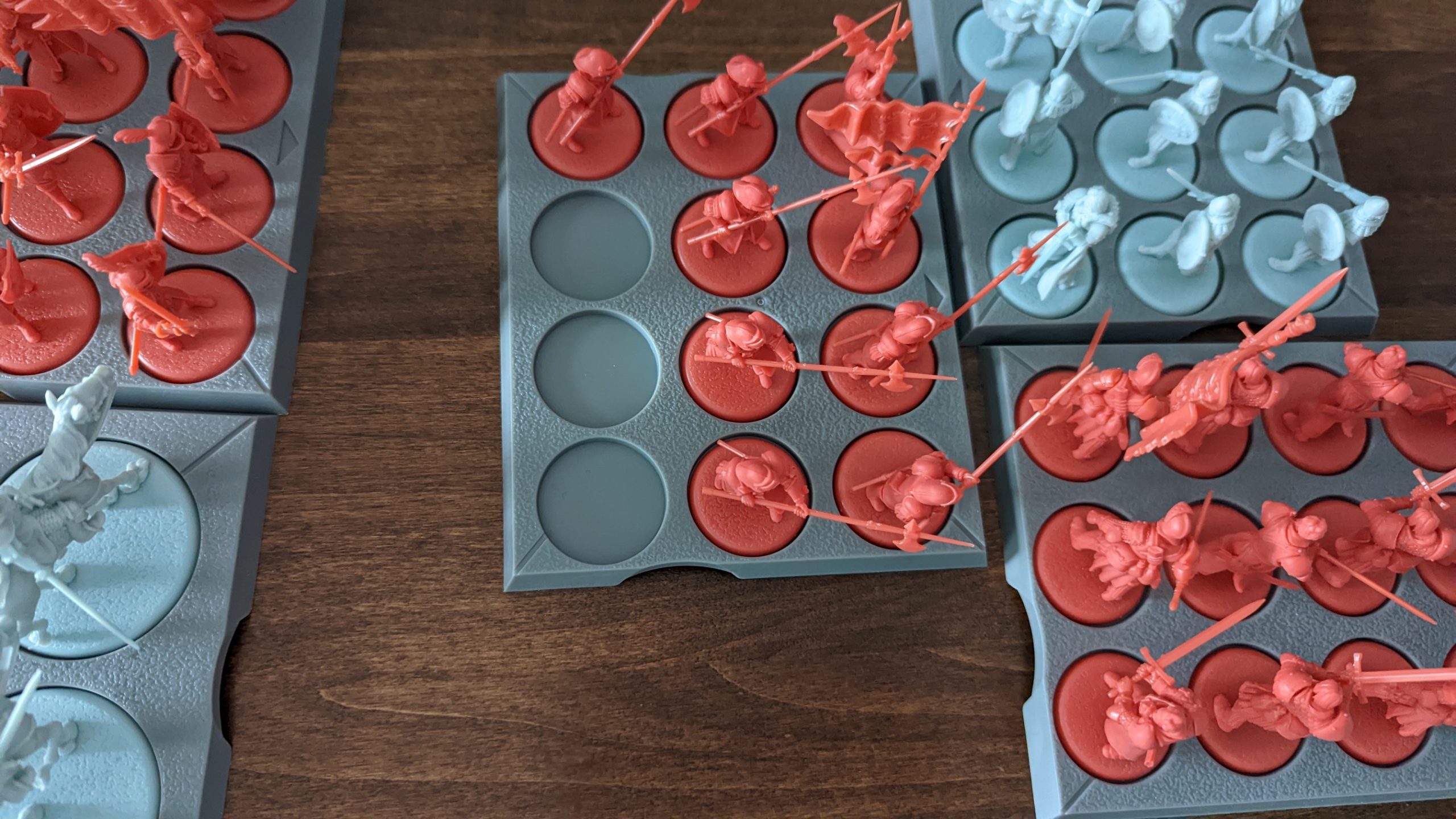 Unfortunately, I wouldn’t feel like I’d done my job as a reviewer if I didn’t pick a few nits, and this game isn’t without its faults. Larger unit trays make the provided punchboard terrain essential, which people used to playing with 3D terrain will always find cheap. If one gets a low result on their charge distance roll, the charging unit makes a random charge and shoots itself in the foot, a bad moment and an extra rule the game doesn’t really need. The game comes with multiple game modes, but except for the basic Game of Thrones, all of them add additional rule complexity that doesn’t actually help enhance the game experience. Finally, the box only holds enough plastic for a small 30-point game, requiring additional buy-in if players want to play the standard 40-point size, but that’s just an unfortunate industry standard.

In the end, I won’t be holding on to my review copy of this starter set, but that’s only because I’m giving it to a friend so I can explore the other houses, especially the recently released Martel.

The Song of Ice and Fire miniatures game is an interesting mix of large-scale mini warfare and worker placement that will please both fans of the IP and fans of the hobby in general.

Nick grew up reading fantasy novels and board game rules for fun, so he accepted at an early age that he was a dork. When he’s not busy researching the complexities of a hobby he’ll never pick up, Nick can be caught trying to either cook an edible meal or befriend the local crows.

See below for a list of our partners and collaborators: