The UK Parliament’s short-lived TikTok account has been shut down after backlash from MPs over the social media firm’s links to China.

The account was set up on the popular app, owned by Chinese parent company ByteDance, as a way to engage young people in politics.

But tensions between Beijing and the West have been rising in recent years, with Westminster banning Chinese firm Huawei from joining the UK’s 5G network.

China has sanctioned seven lawmakers and allies who have criticized Beijing over its treatment of the Uyghur Muslim minority group – in what China has described as ‘malicious lies’.

The account, which went live on July 27, has been locked and its content deleted less than a week later.

A spokesperson for the UK Parliament said: ‘Based on feedback from members, we are closing the pilot UK Parliament TikTok account earlier than we had planned.

‘The account was a pilot initiative as we tested the platform as a way to reach a younger audience with relevant content about Parliament.’

The UK Parliament TikTok app has been locked and deleted just a week after it was set up due to concerns about the app’s links to Chinese. 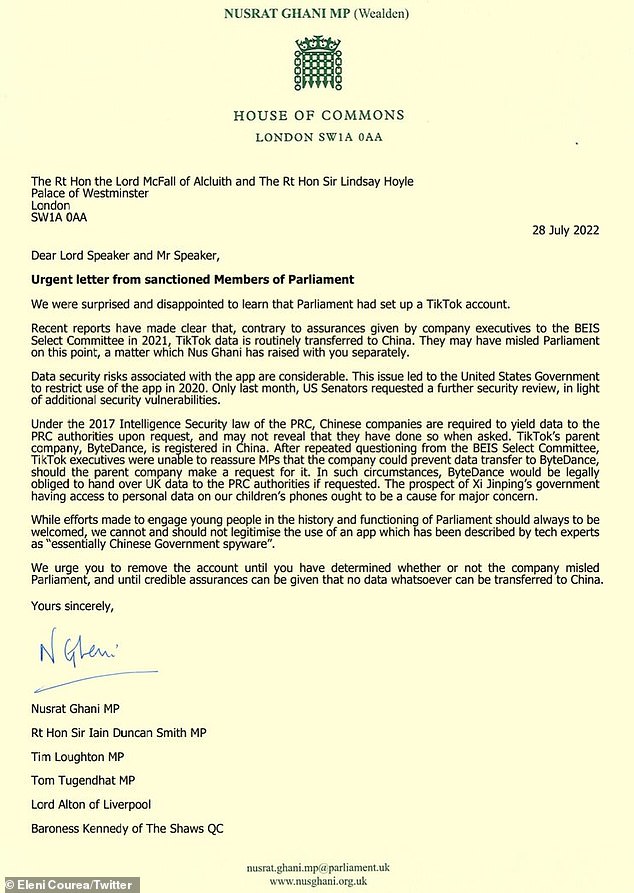 Followers of the account have come across an updated bio that reads: ‘This account is now closed. Find us at www.parliament.uk.’

ByteDance is based in China and lawmakers have raised concerns about user data being sent to Beijing.

In a letter to the Speaker of the Commons and Lords, seen by the Politico website, a group of senior Tory MPs – including Tom Tugendhat, Nuss Ghani and Iain Duncan Smith – who have been sanctioned by the Beijing government for speaking out about human rights abuses. – Complained about TikTok account. 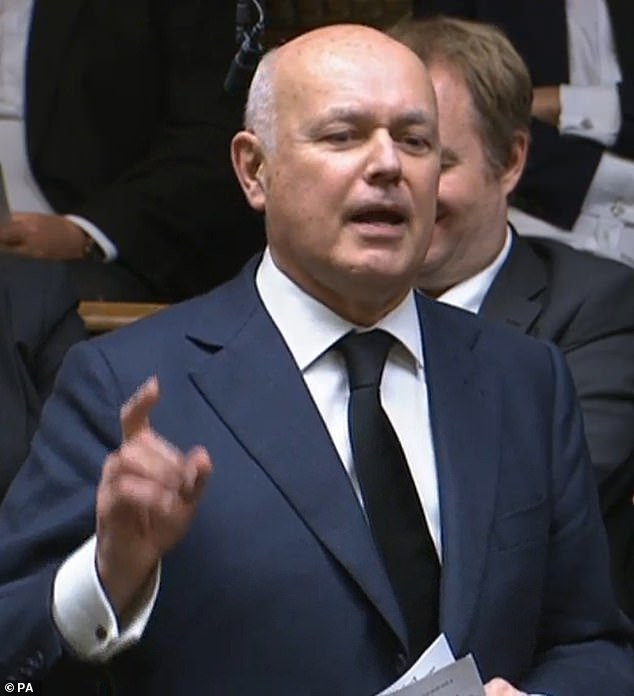 Former Tory leader Sir Iain Duncan Smith welcomed the decision to close the account after signing a letter calling for it to be deleted, as did Tom Tugendhat and Nuss Ghani.

What is TikTok and who does it belong to?

TikTok is a social media app whose parent company ByteDance is Chinese.

Users can live stream, create short videos and music videos and GIFs with many functions.

In 2019, it became the second most downloaded app globally after Whatsapp.

TikTok is known as Douyin in China where it was launched in 2016 and then made more widely available worldwide in 2017.

Douyin is still the version of the app used in China, available for download separately on TikTok.

The app is most popular among children and young adults who use it to dance on their own and lip-sync to chart hits.

Beijing-based social network TikTok reached one billion global users in the third quarter of 2021 and is expected to reach 1.8 billion by the end of 2022.

“The prospect of Xi Jinping’s government gaining access to personal data on our children’s phones should be cause for great concern,” the letter said.

Theo Bertram, the app’s vice-president for government relations and public policy in Europe, told MPs in July that ‘we have never been asked to hand over TikTok user data to the Chinese government and we will not.’

TikTok confirmed that it wrote the letter to signatory subscribers to help them understand the data protection process and to reassure them that data is stored in the US and Singapore.

A TikTok spokesperson said: ‘Whilst it is disappointing that Parliament will no longer be able to engage with the millions of people who use TikTok in the UK, we reiterate the offer to reassure MPs who have raised concerns and clarified any impropriety to us. platform.’

He said: ‘We are delighted that Parliament, he was told immediately, realized there was a problem and closed it.

‘It’s important that others see it now and we need to talk to people about not using TikTok.’

Just last month, the UK called for a ban on two Chinese CCTV cameras that can recognize faces, listen to conversations and judge a person’s mood.

A group of 67 MPs and Lords, including Lib Dem leader Sir Ed Davey, urged the government to ban the sale and use of Kikvision and Dahua cameras.

Concerns over the privacy of UK TikTok users have escalated following the outbreak of hostilities between Huawei and Hong Kong following the UK government’s decision to ban the Chinese telecom company from 5G networks over security fears.

Telecom companies were barred from buying Huawei 5G, while all of the firm’s existing 5G technology is slated to be phased out of the network by the end of 2027.

This further soured relations between the UK and China, raising already tense tensions as Beijing succeeded in forcing Hong Kong under sweeping security laws under its control.

And the most recent tension comes over Taiwan independence. China is staking its claim on Taiwan as the UK seeks to support the democratically-run island along with the US.

Beijing has repeatedly warned against US Democrat Nancy Pelosi visiting Taiwan but after she did, urged Britain not to follow in her footsteps.

Speaking at a press conference in London today, Zheng Zeguang urged politicians not to ‘underestimate the extreme sensitivity of the Taiwan issue’ and not to ‘dance to the tune of the United States’ by visiting.

Pelosi, the US House speaker, spoke after Zeng became the most senior US politician to visit Taiwan in 25 years when she arrived on the island yesterday.

The move infuriated Beijing, which in response launched a massive series of war games that would encircle and effectively blockade Taiwan for days.

Ministers could visit the island – which considers itself independent, but sees Beijing as a rebel province – in November or December, The Guardian said.

The committee has not confirmed whether this meeting will take place or not.

Relations between the UK and China have hit a low point after the pair clashed over Hong Kong – another region where Beijing is mounting pressure.

Britain controlled Hong Kong from 1839 until 1997, when the territory was peacefully returned to China under the ‘One Country, Two Systems’ treaty.

This meant that Hong Kong would officially be part of China, but would govern itself under a separate legal system.

But in 2020, after years of quashing pro-democracy protests, Beijing succeeded in forcing Hong Kong under a sweeping security law that brought it under its control.

Britain protested, and offered visas to those who wanted to leave the country to come to the UK – angering Beijing.

Liz Truss and Rishi Sunak, who are seeking to replace Boris Johnson as the next prime minister, have both taken a tough stance on China.

Sunak recently called the country ‘this century’s greatest threat to the security and prosperity of Britain and the world’ and vowed to ban the Confucius Institute – an academic body accused of state propaganda – from universities.

Truss, meanwhile, has a record as foreign secretary for speaking out against China’s human rights abuses and has aligned himself with Tories with a history of rebuking Beijing, such as Iain Duncan Smith.

Zheng addressed those comments today, calling on both candidates to be “realistic” about the fundamentals of bilateral relations.