The latest entry in the Total War franchise was ported to Linux by Feral Interactive last month. After spending a lot of time commanding armies and wreaking havoc on the land, I have some thoughts.

For those of you who may not be aware, the colloquially named Total War: Warhammer III is the third entry in the crossover franchise of tactical Total War games with a Warhammer Fantasy setting. It sees players choose from various clans and factions and fight for supremacy, either trying to save or cover up the power of an imprisoned and dying god. The game mixes a strategic turn-based level where troops are recruited and directed, cities are conquered or sacked, with real-time battles where hundreds of units can be pitted against each other.

I’ve played the Total War series over the years and the core formula has remained more or less unchanged. The developers have gotten good at polishing the heart of things and hence, even at the worst of the game, it never fails to be at least somewhat entertaining. This latest entry attempts to add unique mechanics to each faction, mostly selectable every two turns to provide some sort of strategic advantage or boost to units or cities. Tech trees are unique and often, there can be different ways to approach city building and income generation.

The bloodthirsty monsters of Khorne, for example, can devastate a settlement when captured, creating a small army out of the chaos that can then wreak havoc a few turns later. They then automatically have the opportunity to expand into populated colonies, as long as they have another settlement in the region. If not, they can use their unique secondary currency, skulls, to create settlements. These skulls are obtained through battle or by destroying cities and are spent on technology or performing special rituals that bring the player Khorne’s favor.

Another faction, the Grand Cathay, is Warhammer Fantasy’s answer to the Chinese empire and includes the harmony mechanic of yin and yang, providing a bonus if your empire balances the elements. Units, buildings and commanders are all one or the other, and some building chains are mutually exclusive. So it is necessary to keep an eye on the overall situation of your empire. In addition, trade convoys may be sent to distant cities, taking multiple turns to reach their destination and subject to incidents and possible wars by hostile factions attacking it. If the caravan reaches its destination, a huge return on the invested gold is given to the player.

Considering that previous titles reserved these more obvious differences for DLC factions added in a steady trickle after launch, I was pleasantly surprised at how different these original factions were.

Most of these bells and whistles are found in the singleplayer campaign, the true heart of the game. Each group essentially competes with each other to reach the bear god Ursun before dying. While there is a simplified diplomacy and trade system, large-scale interactions with factions will inevitably end in war. To break up the usual map-painting and territory-conquering, every two turns portals that lead to the realm of the Chaos Gods open on the map. Factions can then proceed to claim the Demon Prince’s soul from each god, navigating the dangers of each realm in this process.

I think this is a particularly good innovation compared to previous titles, as it’s easier for the AI ​​to keep up with players throughout the campaign. I wanted to monitor the progress of the AI ​​opponents and be aware of the balance in my expansion; If my main army is too far away from the portal at the wrong time, it can mean the difference between grabbing a soul before the AI ​​or not. In my two missions, the AI ​​group got all four lives before me. I still managed to win in the end, however, as the troops could be intercepted before reaching the final campaign battle location. Defeating a faction leader made them lose their collected soul, and so I was able to buy myself some time before Ursun eventually succumbed.

However, the downside of this more focused progression is that each faction’s win condition is more or less the same. The pre-scripted battles in Chaos Realms, as well as the final battle, are a bit dull if you’ve done them more than once. There are some faction-specific quests and expansion goals, including some unique buildings that can be built in certain cities—if won—but that doesn’t do much to offset the general focus. Overall, I’d take this more accurate approach over the slogs that characterized the first two titles.

Unit rosters vary considerably between factions, with some ranged units, cavalry, special abilities, hit and run tactics, and everything else that is, by now, standard for Total War games. There’s still some room for experimentation in your faction’s roster, with some alternate units and heroes emphasizing certain thematic aspects of the faction more than others. For example, Kislev’s infantry also has some ranged abilities that can either be a base for a flexible core of all-rounders or be used to distract powerful cavalry and ice mages to really do a lot of damage. As units become unlocked towards the end game, there is a much better reason to use more basic units in your army, thanks to the unlocked technologies and bonuses granted by commanders.

That said, not every group is the same. While this is less obvious in a singleplayer campaign, these disparities become more apparent during solo battles with the AI ​​or multiplayer. Although there are some patches that fix balance issues, not everything is done yet. The reality is that some groups are less competitive than others. Especially when it comes to auto-resolving combat which has been addressed with the patch again, but can still be unnecessarily harsh. In a long campaign this can mean a few more hours spent manually winning relatively-insignificant battles to maintain the strength of your carefully recruited army.

The battle AI itself lives up to other Total War titles. In other words, he can win against a weaker player but is usually tactically incompetent. It’s easy to flank units, bait them, and otherwise (always) apply basic counters to numerical superiority. The most interesting types of battles occurred when trying to hold a distant outpost against a surprise attack using only garrison troops. Part of this is due to disparity but also due to the new siege warfare system that allows defenders to place their own barriers and structures according to available resources. The longer the siege (or the specific technology unlocked), the more toys Guardians will potentially be able to set up. It’s a nice novelty but eventually becomes less and less exciting during the campaign, let alone many. 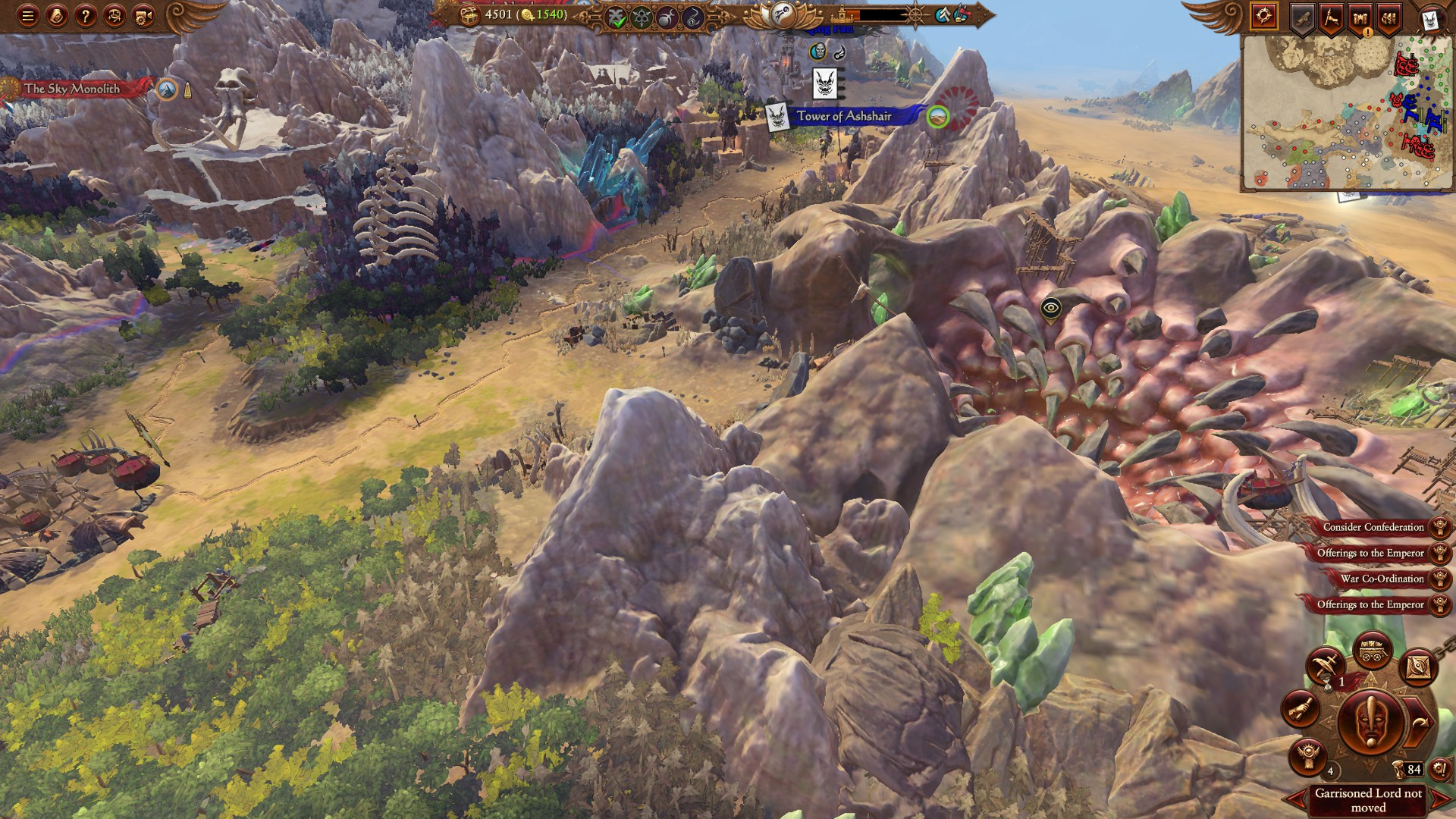 Visually, I think Total War: Warhammer III is generally nice to look at. The Chaos Realms are very unique and have a lot of small details and animations that are worth appreciating. Other areas of the map are also vibrant with their own landmarks and special features. But, unfortunately, all of them get relatively little chance to shine. Because the main conflict will be between various chaotic factions in the north, the icy wastelands, and others, the battlefields repeat themselves. I can’t tell you how many times I’ve fought over snow-covered hills or dead borders that looked the same.

To be fair, it’s true to the idea of ​​Warhammer Fantasy. Still, looking at the previous entry’s flashy colorful lizards with jungle environments, the green and confused orcs of the badlands, or the cold dead civilization of the desert’s tomb lords, I can’t help but see the fight mostly in icy terrain for the most part. The game is relatively mild. It’s only in the far reaches of the map’s periphery—where there’s little reason to expand and struggle—that forests, jungles, badlands, and other areas can be found. An average playthrough will see less and less player involvement in those locations as you’ll be too busy dealing with the AI ​​and Chaos Realms to send missions there.

This specific complaint will be addressed shortly. The upcoming Immortal Empires update is expected to be released in beta next month and will combine the previous game’s map and factions into a mega campaign of sorts. Owners of previous titles will have access to this new campaign along with other free content. It’s exciting and I’m excited to see how all the different factions will change the feel of the game.

On the technical front, Feral’s Linux port is a solid case. It easily beats the Proton version of the game across the board. The difference is smallest at higher graphical settings (due to my own hardware constraints) but I noticed higher minimums and much higher, and more consistent, frame rates with the port. My aging RX 480 was able to hit the 60 FPS target using a mix of settings on the campaign map and in combat, mostly at medium range. Cranking the options lower than some details or ‘Ultra’ still provides a very playable experience that stays around 30 FPS. I should also note that the Linux port also has an FSR option not found in the Windows version, which may allow players on older hardware to sacrifice a bit of visual fidelity for higher performance.

However, the Linux port has some notable drawbacks. First and foremost is the lack of cross-platform multiplayer. Those playing ports will not be able to play with Windows users. So if you’re into the more competitive multiplayer side of the Total War fandom, you might be better off playing the game through Proton.

Secondly, there is a possibility of a delay for the patches port. Shortly after the port’s release, the game received its 1.3 update which included some important balance and quality of life changes. That patch took a few weeks, and a few hotfixes, to make it to the Linux side. Considering that it was pretty much the same for the old release by Feral, I expect it will take a long time for Linux gamers to get their hands on the highly-anticipated Immortal Empire patch with its expanded campaign and map.

With all that said, I think Total War: Warhammer III is a great game that will only get better over time. It probably sticks a little too close to the tried and true formula for my tastes but new stuff like Chaos Realms is a welcome attempt to shake things up a bit. Elsewhere, it’s just the usual total war fare. I’m willing to overlook the weak combat AI because the general experience of trying to survive and thrive through challenges from all directions is compelling enough to satisfy after completing a hard-fought campaign. But others may not be so generous, and a lack of progress on that front may put off more die-hard players. Still, if it’s any consolation, there’s already a vibrant mod scene. The Workshop can find the usual difficulty and balance modes, quality of life improvements and ambitious fixes and player expansions.

With the big changes only a month away, it might be wise to wait until then before getting into the game for the first time. No doubt major balance changes will follow, as well as the usual additional free content that Creative Assembly is known to include with major updates.

You can get Total War: Warhammer III on Feral’s Store, Steam, or the Humble Store.